Kettering General Hospital and Young Healthwatch Northamptonshire have won a national award for work they have undertaken with young people.

The two organisations entered the Patient Experience Network National Awards (PENNA) in the ‘Team of the Year’ category. 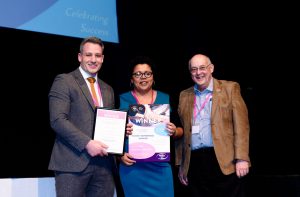 The joint entry was called ‘It’s my health – youth voice’ and their win was announced on Wednesday 20 March 2019 at the awards ceremony in Birmingham.

The entry described the way that members of Young Healthwatch were encouraged to carry out a visit to children’s services at KGH in April 2018 from which they documented their findings and produced a report – which was then acted on by the hospital.

The report recommended improvements – which the hospital has made – to children’s services including:

Chair of Young Healthwatch Northamptonshire, Tanzi, said: “It has been amazing to work with Kettering General Hospital, every time we visit we see more of the recommendations we have made become reality. It is fantastic that the views of young people are taken on board and acted upon.”

Kettering General Hospital’s Head of Patient Experience and Involvement James Allan said: “The perspective that Young Healthwatch brought was refreshing. We learned a lot from their visit and will be using the new perspective they gave us – looking at things through the eyes of a young person – in other pieces of work in the future.”

“We plan to continue to work with Young Healthwatch and visit local schools to capture more of the experience of children when they visit hospital – either to be treated or with relatives.”