Connected Together is seeking to recruit an experienced communications officer wishing to progress in their field.

The post holder for this role will be instrumental in helping to steer and deliver the work of Connected Together CIC and its high profile statutory local Healthwatch in Rutland, North Northamptonshire and West Northamptonshire to champion the views and needs of the public; working with the local health and care sector to ensure that service design and delivery meets these needs. It is an opportunity to have a varied role that makes a difference, working with a dynamic team based in either Northamptonshire or Rutland, developing links with key stakeholders in the health, care and voluntary sector.

For the full job description and application form please find the downloads below. If you require an application pack to be sent to you in the post, please call 0300 002 0010. Closing date for applications will be Friday 8th April 2022.

In April 2016 the government introduced a higher minimum wage rate for all staff over 25 years of age inspired by the Living Wage campaign.

However, the government’s ‘national living wage’ is not calculated according to what employees and their families need to live.

The real Living Wage rates are higher because they are independently-calculated based on what people need to get by.

The Living Wage Foundation encourages all employers that can afford to do so to ensure their employees earn a wage that meets the costs of living, not just the government minimum.

Connected Together has been acknowledged as an employer that provides above the ‘national living wage’ for its employees to ensure they are able to earn enough to live on.

Find out more about the Living Wage Foundation

Kettering General Hospital and Young Healthwatch Northamptonshire have been shortlisted for a national award for work they have undertaken with young people.

The two organisations entered the Patient Experience Network National Awards (PENNA) in the ‘Team of the Year’ category. The joint entry was called ‘It’s my health – youth voice’ and will be judged alongside three other NHS organisations at the finals on Wednesday March 20, 2019, at The Rep Theatre, Birmingham. 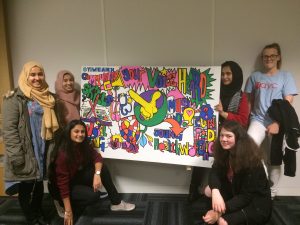 out a visit to children’s services at KGH in April 2018 from which they documented their findings and produced a report – which was then acted on by the hospital.

The report recommended improvements – which the hospital has made – to children’s services including:

Young Healthwatch Project Manager Esther Stimpson said: “We are delighted that our partnership project with Kettering General Hospital has been shortlisted for this national award.

“We think it was a great example of team working between Young Healthwatch, Healthwatch Northamptonshire and Kettering General Hospital that enabled young people to make a real difference to the environment provided for young people at the hospital.”

Chair of Young Healthwatch Northamptonshire, Tanzi, said: “It has been amazing to work with Kettering General Hospital, every time we visit we see more of the recommendations we have made become reality. It is fantastic that the views of young people are taken on board and acted upon.”

Kettering General Hospital’s Head of Patient Experience and Involvement James Allan said: “The perspective that Young Healthwatch brought was refreshing. We learned a lot from their visit and will be using the new perspective they gave us – looking at things through the eyes of young person – in other pieces of work in the future.

“We plan to continue to work with Young Healthwatch and visit local schools to capture more of the experience of children when they visit hospital – either to be treated or with relatives.”